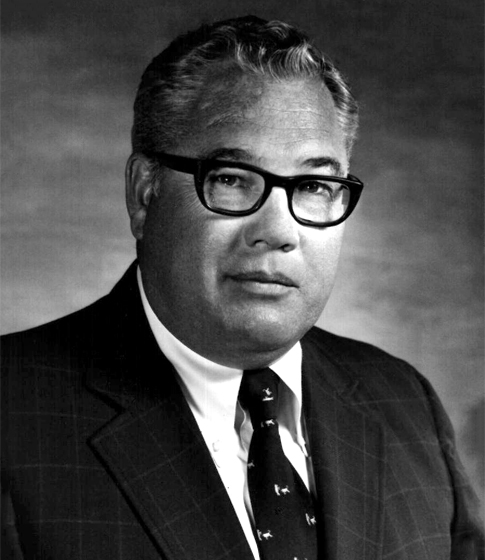 Mr. Poundstone started his mining career at the Arkwright Mine in the summer of 1947 as a timberman; He worked two summers in this capacity and joined Christopher Coal Company upon graduation from West Virginia University in 1949. He served as a lab technician, a preparation engineer, belt foreman, section foreman and production engineer. In 1955 he was given the responsibility for opening the Humphrey Mine and was made Superintendent in May 1955. In 1960 he was promoted to General Superintendent of the Arkwright, Osage and Booth mines. In July 1961, he became Assistant to the Vice President of Operations - Consolidation Coal Company, Morgantown, West Virginia, and in February 1965 became an Executive Vice President of Consol in Pittsburgh, in charge of all operations. He assumed his present responsibilities -all new mine development, mining research, engineering, exploration and planning functions -- in November 1972. In 1970 he served as President of the Coal Mining Institute of America; 1970-71 served as a Director of the Engineers' Society of Western Pennsylvnia; is a member of the Society of Mining Engineers of AIME; 1971-73 served as a Director of the Bituminous Coal Operators' Association, Washington, D.C.; served as a Director of the Western Pennsylvania Coal Operators' Association; in 1975 was elected to the Board of Directors of the Bituminous Coal Research, Inc., and is Chairman of the BCR Production Research Committee. He has served on various energy policy committees. He is a member of the King Coal Club and in 1973 served as President; a member of the Executive Committee of King Coal; a member of the Old Timers' Club and in 1974 served as President; he is also Chairman of the Education Committee of the Old Timers' Club. He is a Director of Conoco Coal Development Company and Consolidation Coal Company of Canada. Mr. Poundstone is the recipient of the Old Timers' Award (April 1949) and the W. A. Tarr Award (1949). In May 1972, he received the "Order of the Black Bull Award" from Penn State University. He is a member of Tau Beta Pi, (Honorary Engineering Society); Sigma Gamma Epsilon, (Earth Science Honorary); Sphinx and Mountain, (Service Honorary)i and was also a member of Phi Kappa Psi Fraternity. In July 1974, he was elected as a member to serve on the Panel on Project Independence Blueprint (CTAB) of the U.S. Department of Commerce and is also a member of the Research Advisory Committee of Carnegie Mellon Institute. In March 1977, he was elected a member of the National Academy of Engineering. Mr. Poundstone is the holder of 34 U.S. Patents covering primarily mining equipment and conveyors. He has been the author of a number of technical publications and was the co-author of a U.S. Bureau of Mines publication, "Removing Methane (Degasification) from the Pittsburgh Coalbed in northern West Virginia" in 1962. In July 1971, he was the author of "Coal Mining in the 70's and a Look Beyond" - this article was published in the July 1971 issue of Mining Engineering magazine . Also, the author of "Sulfur Dioxide-A Burning Issue" a the Ohio Mining & Reclamation Association - June 16, 1978. In May 1979, he was elected by the A.S.M.E.-A.I.M.E. to receive the Percy Nicholls Award for notable scientific or industrial achievement in the Field of Solid Fuels. In June 1979, Mr. Poundstone was selected to receive the Society of Mining Engineers of AIME' s Distinguished Member Award for outstanding or notable contributions to the technology or professional activities encompassed by the Society -- SME-AIME Distinguished Member Class of 1979 Award.