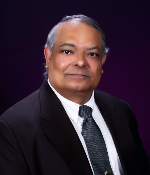 For His Notable Contributions to the Advancement of Solid Fuels in the State of Alaska and for Scientific Achievements in the Field of Solid Fuel.

Dr. Sukumar Bandopadhyay is a professor of Mining Engineering at the University of Alaska Fairbanks. He has served for several years as the Dean of the School of Mineral Engineering, Director of the Mineral Industry Research Laboratory, and Director of the Petroleum Development laboratory at the University of Alaska Fairbanks. He received his B.Sc. degree in mining engineering and M.Tech degree in mine planning from Banaras Hindu University, India. He also holds an MS degree in mining engineering and operations research and a Ph.D. degree in mining engineering from the Pennsylvania State University. He is a registered professional engineer in the State of Alaska. Dr. Bandopadhyay has received the Carol Feist award for outstanding undergraduate advising at the University of Alaska Fairbanks. He received the 2000 Society for Mining, Metallurgy & Exploration’s (SME) Coal Division Distinguished Service Award, and also the 2007 Ivan B. Rahn Education Award from SME. Dr. Bandopadhyay is a distinguished alumnus of Banaras Hindu University, and a Centennial Fellow of The Pennsylvania State University. He is a Distinguished Member of the Society for Mining, Metallurgy, and Exploration. Dr. Bandopadhyay has worked in coal and metal mines in various supervisory capacities for over five years. He has served in various capacities in SME/AIME and in the Coal Division. He is a past chair of the Coal Division, Past-chair and Vice-President of the Golden Northwest Region, and has served on the SME Board of Directors. He is a past chair of the Alaska Section of the AIME. He is currently serving on SME’s Education and Professional Development Strategic Committee. Dr. Bandopadhyay is the Founder-Chair of the International Arctic Mining Council and was a co-editor of the proceedings of the First and Second International Symposium on Mining in the Arctic. He is also the editor of the Proceedings of the 30th.International Symposium on the Application of Computers and Operations Research in the Mineral Industry, and a co-editor of the Proceedings of the 10Th. US/North American Mine Ventilation Symposium. He has over one hundred sixty peer-reviewed publications in professional journals and symposium proceedings. He served as a visiting professor at Lulea University, Sweden. He has also served on the United Nations’ Development Program (UNDP) as a TOKTEN consultant. His research interests are in coal mining, mining in the arctic, Operations Research and Computer Applications, Mine Ventilation, Ceramic Membranes and Energy Materials.