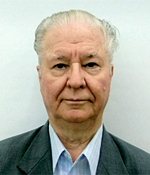 Dr. Makogon is a world-renowned expert on gas hydrates. In 1965-66 he has experimentally proven that gas hydrates may accumulate as large natural deposits in porous layers. Yuri F. Makogon graduated with honors from the Krasnodar Technical School in 1951 and from the Gubkin Petroleum Institute in Moscow in 1956, started his career that year at the Shebelinskoe gas Field, in the Ukraine. In 1962 he received M.S. (Candidate) degree at the Gubkin Oil-Gas Institute, followed by his Dr. Sc. in 1975, and full Professorship in 1985. From 1961 to 1974 he worked at the Gubkin Institute of Oil and Gas. As a professor, he taught at the Indian School of Mines in Dhanbad from 1965 to 1967, and in 1973, at the Freiberg Mining Academy of Germany. He worked as a consultant in many countries. He helped remove multiple hydrate plugs in permafrost regions and in the offshore conditions. In 1969 this discovery was formally recognized and registered in the USSR. Yuri F. Makogon born May 15, 1930 in Ukraine. Dr. Makogon has authored eight monographs, including six books on gas hydrates and over 270 scientific papers. He holds 27 patents and has close to 60 years of experience in education and research for the oil and gas industry. Yuri F. Makogon is a Full Member of the Russian Academy of Natural Science. Hе was one of the founding of members of the RANS in 1990. He had served as the first Chairman of the Oil and Gas Section of the RANS. He is a Full Member of the Оil and Gas Academy of Ukraine since 2010. Yuri is also a Member of the International Society of Petroleum Engineers. He organized and was the first Chairman of the SPE International, Russian Section in 1991-93. He is also a member of the editorial board of the International Journal of Geology and Mineral Resources of the World Ocean. He was the International Distinguished SPE Lecturer for 2002-2003. He is presently the USA Section Regional Secretary of the RANS.

During his career Prof. Makogon held a number of leadership positions including head of the Gas Hydrate Laboratory of Petroleum Engineering Department at the Texas A&M University (1995-2010), Chairman of the technology group of international CODATA committee (1907-2008), and Director of the Russian Academy of Science Institute for Oil and Gas Research hydrate lab and at the Hydrocarbon and Environment Institute of the RANS (1987-1993). From 1974 till 1987 he served as the head of the gas-hydrate laboratory at the Central Gas Research Institute of the USSR. Dr. Makogon joined Texas A&M University in 1992 and has established a new direction in the research of water-gas phase behavior in the Earth’s stratum, discovered a number of important new physical gas hydrates properties, researched kinetics and morphology of hydrate crystals, structural hydrogen bond memory of water, hydrate crystal transformation, and expanded knowledge of the existence of tremendous gas reserves in the hydrate form, proposed hydrate exploration and appraisal methods and technologies for development of hydrates reservoirs. Yuri has retired in 2008. Dr. Y.F. Makogon holds an Honorary Doctorate of the Nikolaev Institute of Inorganic Chemistry Russian Academy of Science since 2005. His awards include Heritage Award recognizing his lifetime scientific accomplishments during the 2016 Offshore Technology Conference in Houston Texas on May 3, 2016; Honorary Medal "Star of Success"; 2015. His awards also include Golden Jubilee Medal of Russia in 1970; the Gubkin State Prize in 1989; Lifetime Achievement Award of Honor by the Sixth International Conference on Gas Hydrates in 2008; Honorary Diploma of the Mendeleev Chemistry Society of Russia in 1982; Golden P. Kapitsa Medal for Scientific Discovery in 1997; Lifetime Achievement Award of Honor by the Sixth International Conference on Gas Hydrates in 2008, Honor Certificate "Most Cited Articles 2007" from the J. Petroleum Science, London 2012; honorary sign "For Merits" in Science and Economics of Russia (2005); Honorary Medal "Star of Success"; 2015. The First Prize at the Chess Tournament of Indian School of Mines in 1967; The First Prize at Young Petroleum Scientist Conference of Russia in 1965; Winner of the Ukraine State Inventors Competition in 1958. He has two children and three grandchildren. His hobbies include art painting, traveling and photography.