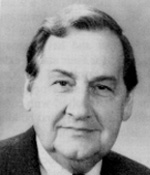 For his significant contributions to numerous atlases and geological surveys containing invaluable advice on oil and gas recovery technology and energy and mineral resource assessment.

Dr. Fisher holds the Leonidas T. Barrow Chair in Mineral Resources at the University of Texas at Austin and directs the Geology Foundation. He is former chairman of the Department of Geological Science and former Director of the Bureau of Economic Geology. Dr. Fisher is a long-time adviser to state and federal officials and testifies frequently to the U.S. Congress. He lectures extensively and has published more than 200 articles, reports, and books. Currently, Dr. Fisher serves on the National Petroleum Council; he is a member of the commission on Geoscience, Environment, and Resources and past Chairman of the Board on Earth Sciences and Resources of the National Academy of Sciences; he serves on the boards of Pogo Producing Company and the Texas Low-Level Radioactive Waste Disposal Authority. He is a member of the Advisory Council of the Gas Research Institute and currently serves on the Presiden's Council of Advisors on Science and Technology Energy Research Panel. Dr. Fisher is a former member of the White House Science Council and the Secretary of Energy Advisory Board and is past president of the American Association of Petroleum Geologists, the American Geological Institute, the American Institute of Professional Geologists, the Association of American State Geologists, the Austin Geological Society, and the Gulf Coast Association of Geological Societies; he is a Fellow and former Councilor of the Geological Society of America. Dr. Fisher served as Assistant Secretary of the Interior for Energy and Minerals and as a member of the White House Energy Resources Council during the Ford Administration. He holds a B.S. and D.Sc. (Hon.) from Southern Illinois University, M.S. and Ph.D. in geology from the University of Kansas, and is a member of the National Academy of Engineering.