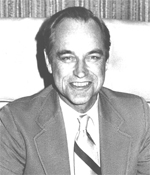 "For pioneering work in the development of the Argon-Oxygen-Decarburization (AOD) Process resulting in higher quality stainless steels and in the conservation of minerals.''

William A. Krivsky recently retired as President and Chief Executive Officer of Velcro Industries. He received both a B.S. and D.Sc. from Massachusetts Institute of Technology, and was first employed by Union Carbide Corporation's Metals Research Laboratories. where he patented the Linde Argon-Oxygen-Decarburization Process and led its early development. Dr. Krivsky's later career has trended to general management, but always included significant commercial technical innovation. He has served as Vice President and General Manager of the Beryllium Metal and Oxide Division of Brush-Wellman, and as President of the Braeburn Alloy Steel Company and the Crucible Specialty Metals Division of Colt Industries.

Dr. Krivsky has been honored for both his technical and his management contributions. including receipt of the Francis J. Clamer Medal of the Franklin Institute. the Sloan School of Management Corporate Leadership Award. and the Extractive Metallurgy Division Award with R. Schuhmann. Jr. He delivered the Extractive Metallurgy Division Lecture in 1973.