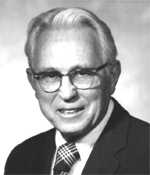 "Distinguished educator and long-time forceful advocate of realistic national policies in the management of mineral resources to insure the security and economic well-being of America."

Dr. Scheid's career has been marked by his dedication to keeping the public informed on critical mineral problems. He has been an advisor to several presidential candidates, and was prominent among those whose efforts led to the recent U.S. Mineral Policy Study.

As Vice-Chairman of the Industrial Minerals Division of AIME, 1956-57, Dr. Scheid proposed, and served as chairman of the first Pacific S.W. Mineral Industry Conference. He has served on a number of AIME committees, and was Chairman of the Nevada Section in 1965-66.