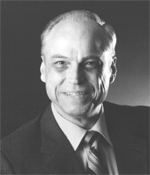 For his pioneering contributions to deep water oil and gas production including development of the first deep-sea, semi-submersible drilling vessel.

Ronald L. Geer is retired from Shell Oil Company as Senior Mechanical Engineering Consultant after a 35-year career in a variety of drilling, production, and research engineering assignments. He earned his BME from Georgia Tech in 1951 after serving a two-year stint in the US Merchant Marines during World War II.

Mr. Geer has made significant principal pioneering contributions in the field of offshore drilling and completions technology and to Shell Oil Company's overall pioneering efforts in developing deep sea floating drilling vessels and associated hydrocarbon drilling and production systems nationally and internationally. He was responsible, as Project Engineer, for key contributions to both underwater drilling systems and the overall engineering associated with the development, installation and start-up of the world's first deep sea semi-submersible drilling vessel. Blue Water I in 1962.

He has been and remains an active member of many professional organizations, codes and standards developing organizations, and national level advisory committees to industry, academia and government. Included in these is his membership in the National Academy of Engineering.

Mr. Geer holds nine US patents, has authored 26 publications and lectures and has been the recipient of numerous awards.