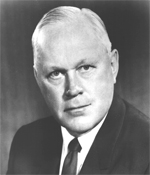 "In recognition of his imaginative direction of geological exploration which has led to the discovery of new major oil and gas reserves, including Alaska's first commercial oil and more recently the vast Alaska North Slope Prudhoe Bay reserve."

Rollin Eckis is a director and executive vice president of Atlantic Richfield Company and manager of its International Division. He is a member of the board of directors of the American Petroleum Institute, and a director and past president of the Western Oil and Gas Association.

Mr. Eckis received an M.S. degree from the California Institute of Technology in 1929. He began his career with the State of California, engaging in geological studies of ground water reservoirs. In 1937 he joined the newly organized Exploration Department of Richfield Oil Corporation as a district geologist.

In 1946 Mr. Eckis was named chief geologist at Richfield. While working in this capacity, he recommended drillings that resulted in the discovery by Richfield of the Cuyama Valley Fields in 1948 and 1949. Mr. Eckis was also responsible for the discovery of the Wheeler Ridge Eocene pool in 1952.

In 1954 Richfield moved Mr. Eckis up to the post of vice president and manager of exploration. As the result of his geological reconnaissance work, the company discovered the first commercial oil in Alaska. Mr. Eckis was promoted to executive vice president in 1956 and elected president in 1962. He held the latter position in 1966 when Richfield merged with the Atlantic Refining Company.

The Engineering Achievement Award was established in 1968 through a fund provided by Mr. Robert E. McConnell. It recognizes beneficial service to mankind through contributions that advance the Nation's standard of living or replenish its natural resource base.