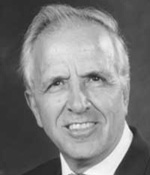 Successful innovator, manager and educator who has a pioneering role in the application of quantitative scientific principles to practical metallurgical problems and thus improve control, reduce emissions, and increase the efficiency for new innovative or existing processes.

Nickolas Themelis is director of the Earth Engineering Center of Columbia University and Chair of the Waste-to-Energy Research and Technology Council. He earned a B.S. and a Ph.D. in chemical engineering from McGill University in 1956 and 1961, respectively. He is the inventor of the Noranda copper smelting process, co-author of the first textbook on rate phenomena in process metallurgy, and founder of the earth and environmental engineering discipline at Columbia University.

Dr. Themelis has been the recipient of many honors and awards, the most recent ones being the 1993 Best Paper Award, Metallurgical Society of Canadian Institute of Mining and Metallurgy; 1997 ALCAN Award for outstanding contributions to the mineral and metallurgical industries; and 2002 Best Paper Award, International Thermal Spray Society.