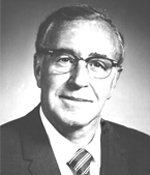 "For his broad achievements in the field of enhanced oil recovery, particularly the use of the carbon dioxide flooding process to increase the Nation's crude oil resources."

L.W. Holm, who retired as Staff Consultant with Unocal Corporation's Brea Science and Technology Division. has conducted research in oil recovery methods for the past 35 years. He holds a B.S. in Chemical Engineering from Northwestern University. Mr. Holm was among the first to publish on the use of carbon dioxide for oil recovery, the use of foam to control the flow of oil and gas in porous media. and to define the relationship between crude oil composition and displacement efficiency in carbon dioxide-miscible flooding. His engineering contributions have led directly to the recovery of large quantities of 0il in numerous regions of the United States and other countries.