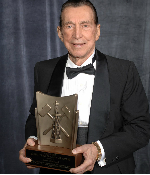 In recognition of his invention, development, and commercialization of high gradient magnetic separation.

In 1970, Joe formed Aquafine Corporation which became the exclusive world-wide representative for sales of his newly invented high gradient magnetic separators. During the next 25 years, Joe sold twenty-three 84" separators (280 tons each) to U.S. and overseas firms (Great Britain, Germany, Australia) and seven gigantic 120" separators each weighing 700 tons (total 11,340 tons) plus smaller units to China and Finland.

Beside his commercial activities, Joe operates R&D, pilot plants, and contract spray drying services. Joe has issued over 100 US and foreign patents and is the author of dozens of publications on industrial minerals production and beneficiation.

Joe resides on Jekyll Island in a waterfront home he built as construction manager. Joe also has a country home on his 1100 acre New Hope Plantation, a Crown Grant dating from 1763. He has been an active member of his community, serving as President of the Jekyll Island Citizens Association, Chairman of the local Board of Education, Foreman of the Glynn County Grand Jury, Vice-President and President of the Tidewater Conservation Association, Founder and President of the Glynn Union of Taxpayers and belongs to numerous other Civic Associations. Joe also served as Chairman of the SME Robert Earll McConnell Award Committee 1996-97. Joe has three children, one grandchild, and is married to Joanna Gentile Iannicelli.