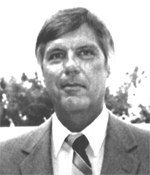 "For his major contributions to the field of horizontal well technology and for his successful efforts to expand the technical scope of SPE programs."

Frank J. Schuh is President of Drilling Technology, Inc. offering services in well design and drilling engineering . He retired from ARCO Oil and Gas Company after a 30 year career in a variety of drilling engineering and research assignments. He earned BS and MS degrees in petroleum engineering from The Ohio State University.

He has been a member of SPE since 1954 and has chaired SPE Forums on Well Control, Well Design Methods and Horizontal Drilling, was a regional director of SPE and was instrumental in starting the annual SPE-IADC Drilling Conference. He founded the Drilling Engineering Association and served as it first chairman. He received the SPE Drilling Engineering Award in 1986 and in 1989 was elected to The National Academy of Engineering and became an SPE Distinguished Member.