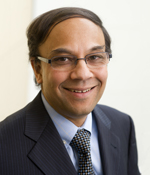 For pioneering work in the new field of green metallurgy and materials as applied to primary production and recycling of metals.

Professor Pal has six years of industrial R&D (Allegheny Ludlum Steel and Westinghouse Electric Corporation) and twenty three years of academic (MIT and BU) experience. His research is in the area of high temperature chemical and electrochemical processes: fuel cells, membrane separation, metals processing and recycling. He has received several professional awards including the TMS Extraction and Processing Technology Awards in 2000 and 2003, authored/co-authored over 170 publications and has 22 patents.