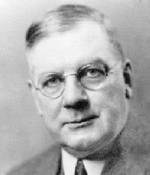 For your development of selective flotation process for lead zinc iron ores; for your part in the development of the leaching of zinc ores and the electrolytic deposition of zinc; for improvement in lead blast furnace practice obtaining high lead recovery from flotation concentrate producing high zinc slags; for success in solving the problems necessary for the treatment of the ores of the Sullivan Nine; for development and improvement of the Betts process for lead refining; for the laying out and successful operation at the Tadanac plant to carry out the very complex metallurgical operations which the handling of the Sullivan ores entails.

Born in 1879 in the small Quebec town of Paspebiac, Mr. Blaylock attended Bishop’s College School in Lennoxville, Quebec and in 1899 was graduated from McGill University with a bachelor of science degree.

From that time onwards, Mr. Blaylock was a Westerner. He went to British Columbia in 1899 and worked there as a surveyor for the Canadian Smelting Works in Trail, B.C. Two years later, he became the company’s chief chemist. In 1906 the company became Consolidated Mining & Smelting Co. of Canada. From chief chemist and metallurgist, he became general superintendent of the Hall Mines Smelter at Nelson, B.C., then general superintendent of the St. Eugene mines. He recommended purchase of the Sullivan mine and took responsibility for its development. In 1919, he became the company’s general manager, a director in 1922, vice-president in 1927, managing director in 1938 and president in 1939.

In his rise to the pinnacle of Cominco, his interest in the welfare of the employees never slackened. His stated belief, “...security, comfort and welfare of workmen will be paid for in increased efficiency and good will of employees…” became a benchmark in Canadian industrial relations circles. In part, at least, the Trail Smoke Eaters who twice carried Canada’s hockey colours to a world amateur championship, were a reflection of his philosophy of human relations in a mining community.

Selwyn Blaylock went to B.C. and the predecessor of Consolidated Mining & Smelting when both the country and the company were young and feeling their way into a future that included a depression and two world wars. All three made excessive demands on the abilities of people in such key industries as metal production and fabrication. Selwyn G. Blaylock accepted all challenges, met all challenges, contributed vastly to the body of knowledge of his profession and remained a caring man of modesty and integrity. He died in Trail November 19, 1945 and was buried at Danville, Quebec.