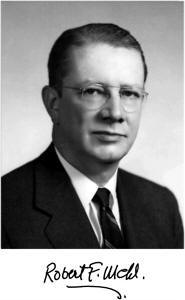 Dr. Mehl was born March 30, 1898 in Lancaster, Pennsylvania and graduated from Franklin & Marshall College in 1919.  He received a Ph.D, in physical chemistry and metallurgy from Princeton University in 1924. In 1927 he established and headed a division of physical metallurgy at the Naval Research Laboratory. In World War II Dr. Mehl conducted an extensive research program on gun steels for the Army. His efforts in establishing metallurgical engineering education programs in Brazil won an award from the Brazilian Society for Metals.  Mehl was noted for transforming of nineteenth-century metallurgy into the modern materials science.  He received AIME's Mathewson Medal five times between 1934 and 1947.  In 1973 the American Institute of Mining, Metallurgical and Petroleum Engineers established a gold medal in his name to be awarded each year.

Some information courtesy of https://www.nytimes.com/1976/01/31/archives/robert-mehl-metallurgist-carnegiemellon-professor.html