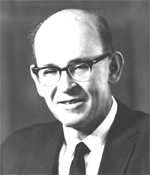 "For his many valuable contributions in the broad field of extractive metallurgy - both as an outstanding research scientist and as an inspiring teacher."

Throughout World War II, Dr. Schuhmann's teaching, research and consulting interests were primarily in mineral dressing, especially froth flotation, surface chemistry and comminution. During the war, Dr. Schuhmann was associated with the Manhattan Project and later the Atomic Energy Commission in developing processes for uranium extraction.

Since 1946, his principal field of teaching and research has been chemical and process metallurgy. Along with his graduate students, he has conducted extensive research on the thermodynamics of high-temperature metallurgical systems, especially matte and slag systems of importance in copper smelting. Dr. Schuhmann is the author of the widely used textbook, "Metallurgical Engineering," based on the unit process approach to extractive metallurgy.

Dr. Schuhmann has been a member of AIME since 1932. He was a charter fellow of The Metallurgical Society in 1963 and has served as a member of its board of directors. He was chairman of the Extractive Metallurgy Division and was a joint recipient of the division's Best Paper Award in 1959 and was EMD Lecturer in 1965.