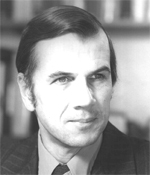 "For his numerous notable achievements and leadership in nonferrous research and development, particularly in the area of continuous copper smelting, and for his dedicated service to the metallurgical profession."

Peter Tarassoff retired as Vice President and Chief Scientist of Noranda Inc. after 29 years in research and development, and is now a consultant. He obtained a BEng degree in metallurgical engineering from McGill University in 1958 and an SeD degree in chemical metallurgy from the Massachusetts Institute of Technology in 1962.

He began has career with the Quebec iron and Titanium Corporation and in 1964 he joined the Noranda Research Centre where his research interests focused on the extraction of copper and other non-ferrous metals. He was appointed Director of Research and Development in 1982, and Vice President and Chief Scientist in Noranda's corporate office in 1988. He is the author or coauthor of 29 papers and holds several patents.

Dr. Tarassoff has served as President of TMS (1985). Director of AIME (1984-1986), President of the Metallurgical Society of CIM, Chairman of the Canadian Research Management Association, and President of the Canadian Institute of Mining, Metallurgy and Petroleum. From 1988 to 1991 he was Chairman of the Minister of Energy, Mines and Resources National Advisory Council to the Canada Centre for Mineral and Energy Technology (CANMET). He has received many honors including the TMS Extractive Metallurgy Lectureship, and he is a Fellow of TMS, CIM and the Canadian Academy of Engineering.