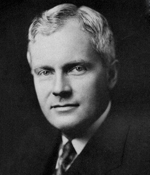 "For his contributions to and constructive research in physical metallurgy, especially for his work on aluminum and nickel alloys."

Indiana has given the world numerous literary men but the Hoosier strain also works out toward scientific and engineering achievement. The Douglas Medalist this year was born in 1889 at Warsaw in the state mentioned. Mr. Merica graduated at the University of Wisconsin in 1908, taught at Chekiang Provincial College at Hangchow until 1911 and then studied in Germany until 1914. He had but recently received his doctor's degree at the University of Berlin when the war came. He began work at home as a member of the staff of the Engineering Experiment Station of the University of Illinois. From there he went to the Bureau of Standards and since 1918 he has been the head of the research department of the International Nickel Company. His work, especially in the field of aluminum and nickel, has been notable but the field for application of his theories has already proved to be much broader than that of these metals. It was in his explanation of why duralumin, quenched at 500° C. increased 40 to 50 per cent in hardness and strength thereafter standing at room temperatures, that he found the secret of spontaneous age hardening and out of this grew the now widely accepted thesis of critical dispersion that has virtually made a new art of heat treatment of alloys and altered many fundamental concepts. His work in developing new fields for the use of nickel is almost equally well known. His list of scientific papers is a long and honorable one.