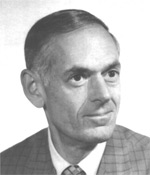 For fundamental contributions to understanding of various aspects of nonferrous metallurgy including precipitation hardening and microstructure-property relationships and for unselfish dedication to the education of young engineers.

Morris E. Fine is Professor Emeritus of Materials Science and Engineering at Northwestern University. He currently is a member of the faculty of the graduate school and continues to do research with graduate students.

He began his long career at the University of Minnesota in 1936, receiving his Ph.D. in metallurgy in 1943. After spending two years on the Manhattan Project at the University of Chicago and Los Alamos National Laboratories and nine years at the Bell Telephone Laboratories, he came to Northwestern in 1954 to join the faculty of a new Metallurgical Engineering Department. Under his leadership, this department soon broadened to Materials Science and became the first such department.

He has been active in AIME affairs, serving as a director of both TMS and AIME. He was chair of the Institute of Metals in 1968 and 1969. He is a fellow ofTMS as well as ASM, the American Physical Society, and the American Ceramic Society. He has received a number of awards, including AIME's Douglas Medal, the TMS Mathewson Medal and Educator Award, and ASM's Gold Medal. He is a member of the National Academy of Engineering and an honorary member of the Japan Institute of Metals.