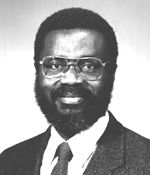 "For his contributions to the fundamental understanding of interfacial phenomena in leaching, solvent extraction, and particle synthesis."

Kwadwo Osseo-Asare is professor of metallurgy and chair of the Metals Science and Engineering Program at Pennsylvania State University. He was educated at Achimota School, Ghana, and the University of California, Berkeley, where he obtained the BS. MS and PhD degrees. His PhD research on thermodynamic modeling and adsorption phenomena in aqueous processing was supervised by Prof. Douglas Fuerstenau. After leaving Berkeley in 1975 he joined the Amax Extractive Research Laboratories, Golden. CO, where as a research metallurgist and project leader he worked on nickel and cobalt extraction and refining. In 1976 he began his career at Penn State.

Dr. Osseo-Asare is author and co-author of over 150 papers and one book on various aspects of aqueous processing. He has served as a visiting professor in Japan, Brazil, and Ghana. He is past chair of the AIME Hydrometallurgy-Chemical Processing Committee, the 3rd International Symposium on Hydrometallurgy, and honorary chair of the 4th International Symposium in Hydrometallurgy. In 1995 Penn State's College of Earth and Mineral Sciences honored him with the Wilson Research Award for Excellence in Research.