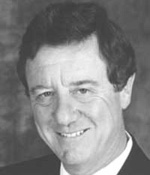 For his outstanding contributions in research and education in the mathematical and physical modeling of metallurgical processing operations.