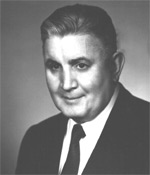 For pioneering achievements in petroleum engineering technology, especially in the areas of transient fluid flow in wellbores and well testing.
Deceased: 1996

William Hurst, retired consulting petroleum engineer, was born in Boston in 1905. He entered the Massachusetts Institute of Technology in 1924 and was graduated with a B.S. in 1928 and an M.S. in 1929 from the School of Chemical Engineering Practice. He was employed as a reservoir engineer with the Humble Oil & Refining Co. in 1929. He later joined Core Laboratories, Inc., in Dallas in 1942 and then the Shell Oil Company, Inc., in 1943. In 1949, he resigned from Shell to enter consulting practice as a reservoir engineer. In that capacity he was actively engaged doing reservoir work and property evaluations, and served as an expert technical witness before State regulatory bodies, the Federal Power Commission in Washington, D C., and civil and federal courts of this country: Mr. Hurst has published extensively on reservoir engineering.

A long-time member of the Society of Petroleum Engineers, Mr. Hurst has served as chairman of the Cedric K. Ferguson Medal Committee. He was named a Distinguished Member of the Society and was the 1964 recipient of the Anthony F. Lucas Gold Medal Award for his contributions to reservoir engineering, as well as for his help and guidance to young professional engineers.