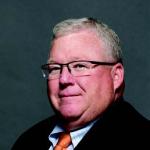 For his tireless contributions to the steel industry through his exceptional leadership and dedication to the Association for Iron & Steel Technology at all levels, including the AIST Foundation, AIST Executive Committee, and his tenure as 2016–2017 AIST president. His outstanding efforts to recruit young engineers to the steel industry and attract new members to the Association demonstrate his commitment to a sustainable future for the industry.

Wendell L. Carter has been in the iron and steel industry for more than 33 years. He began his career with Inland Steel. He stayed with the company throughout several mergers that resulted in what is today the world’s largest steel company, ArcelorMittal. His expertise includes 20 years in primary operations. He has also held roles in corporate strategy and quality control. Currently, Carter serves as the general manager for ArcelorMittal’s largest mill in the United States, Indiana Harbor. That role also requires management of Minorca Mine and downstream facilities I/N Tek and I/N Kote and Riverdale. Carter was the 1997 recipient of the J.E. Johnson Jr. Award. He holds a B.S. degree in metallurgical engineering from Iowa State University and an M.B.A. from Indiana University.