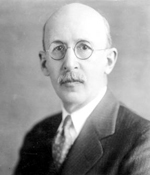 Walter C.Mendenhall was born in Marlboro, Stark County, Ohio in 1871. Mendenhall's early schooling started in the country school at Marlboro, but was completed (through high school) in Portland, Oregon. There he lived for several years with the family of his mother's brother. He then returned to Ohio and taught school for a short time before entering Ohio Normal University (now Ohio Northern University) at Ada.

While still an undergraduate, Mendenhall had been employed, initially as a teamster and laborer, by the U.S. Geological Survey, assisting M. R. Campbell with a study of the Appalachian coal fields. Campbell, some thirteen years older, had been a family friend and must have been largely responsible for Mendenhall's decisions to enter the field of geology and to affiliate with the U.S. Geological Survey—two decisions that determined the remainder of Mendenhall's long career.

Mendenhall graduated from Ohio Normal in 1895 with the degree of B.S. and immediately entered full-time work with the U.S. Geological Survey—again as assistant to Campbell in a continuation of the coal basin studies. Except for leaves of absences in 1896-1897 for a year of graduate work at Harvard and in 1899-1900 for a year of study at Heidelberg, Germany, Mendenhall remained a member of the Survey until his retirement February 28, 1943.

Mendenhall was a member of many scientific and professional societies, including the National Academy of Sciences (to which he was elected in 1932), the Geological Society of America (president in 1936), the American Institute of Mining and Metallurgical Engineers and the American Association of Petroleum Geologists (in both of which he held Honorary Memberships).

Among his honors were Honorary Sc.Ds from the Colorado School of Mines in 1928 and University of Wisconsin in 1932. He received the Penrose Medal of the Society of Economic Geologists in 1944.