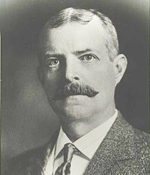 Waldemar Lindgren remains to this day one of the most respected and admired geologists throughout the world.  His many writings constitute the best testimony of his greatness.

He went to work for the U.S. Geological Survey in 1884. Thus began an illustrious 31-year career with the greatest geological organization in the world.

He spent much of his early work on the ore deposits of the Rocky Mountain Region. His reports were considered both stimulating and brilliant. He widened his field of exploration and knowledge of ore deposits by adding Australia, South America, Mexico and Canada to his list of scientific conquests. Many of his papers established veritable milestones in the study of ore deposits. His methods of thorough field and laboratory study were renowned.

In 1905, he and a few associates established the famous journal: “Economic Geology.” His book, “Mineral Deposits” achieved first rank as textbook and reference in its field and gained the status as the best work of its kind in any language.

In 1912, he resigned as Chief Geologist of the Survey and became head of the Department of Geology at the Massachusetts Institute of Technology.

There is no doubt, that Lindgren’s brilliant contributions to the science of ore deposition and in the application of geology to the mining industry have left to his followers a rich legacy of sound doctrine.