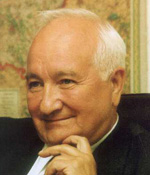 For achievements and stewardship of the Russian oil industry, and uniquely influential role in the growth SPE in this crucially important region.

Valery Graifer is chairman of the board of Lukoil. Prior to that, he was chairman of Russian Innovative Fuel and Energy Company (RITEK), of which he is also a founder, and R&D and environment executive and chairman at Lukoil. A pioneer of the Siberian oil frontiers of Tatarstan, Graifer became chief engineer and head of oil and gas production and processing at Tatneft when he was 34. During 1985 to 1990, he served as Russia’s Deputy Minister of Oil.The winner of numerous former Soviet Union and Russian state awards, Graifer was a lecturer at Gubkin State Oil & Gas University and was a founder of its board of trustees. He also was chairman of the executive committee of SPE’s Russian Oil & Gas Conference and Exhibition in 2006, 2008, and 2010. Graifer graduated from the Moscow Oil Institute, later Gubkin University.