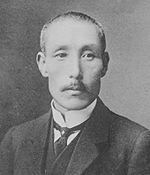 Tsunashiro Wada was born March 15, 1856, at Obama, province of Wakasb, Japan, son of a samurai of the Obama clan. He studied mineralogy at Kaisei School and he served as assistant professor under Prof. Naumann at the Department of Geology in the Faculty of Science of the Imperial University of Tokyo in 1878. He served as the first director of Geological Survey of Japan in 1882 and after studying in Germany in 1884, he concurrently took the position of professor at the Faculty of Science of the Imperial University of Tokyo in 1885. He also served as the director-general of Mining Affairs of the Ministry of Agriculture and Commerce and enacted the Mining Ordinance in 1889. He also played an active role in the establishment of modern steel plants and served as the Commissioner of Steelworks in 1897. He was selected as a member of the House of Peers in 1917. On several occasions Dr. Wada has been decorated with medals by the Emperor of Japan and by the governments of various other nations.

Dr. Wada's publications include a work on mineralogy, written when he was but twenty years of age. To this succeeded in 1877, two volumes, one entitled "Crystallography," the other " The Mineral Industry of Japan "; of this latter work he published, in 1904, in Japanese and English, an enlarged and revised edition, the "Minerals of Japan," with numerous photographs of crystals. In 1893, when he resigned as director of the Geological Survey and The Imperial Mining Bureau, he recorded his long experience in a work entitled " The Mining Industry of Japan during the last twenty-five years, 1867-1893," issued by the Mining Bureau, Department of Agriculture and Commerce of Japan, 1893. Since 1904, Dr. Wada has issued in Tokyo successive supplements to his "Minerals of Japan," under the German title "BeitrEige zur Mineralogie von Japan." In spite of the German name, the articles in this serial publication are almost all in English. It is also well worthy of note that he had assembled the greatest collection of fine Japanese minerals. He was also known for his collection and study of ancient documents and wrote the "Hosho Yoroku" (1918).