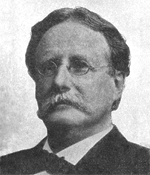 Thomas Messenger Drown, born March 19, 1842, was graduated from the Philadelphia Central High School in 1859, and from the medical department of the University of Pennsylvania in 1862. After a brief period of practice as a physician, he turned to chemistry as his life work and studied at Harvard and Yale, as also for three years in Germany, at Freiberg and Heidelberg. In 1873 he was elected secretary of the American Institute of Mining Engineers which position he ably held for eleven years. From 1874 to 1881 he filled the chair of chemistry in Lafayette College. In 1885 he accepted the professorship of chemistry in the Massachusetts Institute of Technology, where he built up a strong department which had, at the time of his resignation, twenty-one instructors and five hundred students. From 1887 to 1895 he was in charge of the chemical department of the Massachusetts State Board of Health and made important researches regarding water supplies, one of the most valuable being that which produced the map showing the normal chlorine in the natural waters of that state. He was elected in 1884 an honorary member of the American Institute of Mining Engineers, in recognition of his services in editing its transactions, and in 1897 he was its president. The degree of Doctor of Laws was conferred upon him by the University of Pennsylvania. In 1895 Dr. Drown was elected president of Lehigh University which position he filled until the time of his death. Thoroughly familiar with the aims and needs of technical education, and being highly qualified by temperament and experience, his administration was most successful. The curriculum was extended, the teaching force greatly enlarged, and the number of students nearly doubled during the nine years of hi~ presidency. He was an earnest advocate of broad training and of the development of high character in students. While he urged the greatest thoroughness in instruction in technical subjects, he deemed it essential that every student should have a good training in the English language and some knowledge of other cultural subjects. In a paper published in Vol. IV. of these Transactions, his views regarding instruction in modem languages for engineering students are presented. The death of Dr. Drown came suddenly and was a great shock to his numerous friends, especially to his co-workers in Lehigh University. His genial disposition, his earnestness, his tact, his rare ability to avoid contention, and his broad knowledge rendered his administration as president one of great success. His work in advancing science and in promoting engineering education was one which will long continue to bear good fruit.