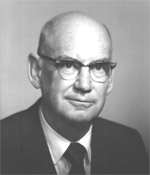 For his research and literary contributions that pioneered an advancing petroleum technology, for his work with industry and government in fostering sound conservation practices, and for devoted service to the Institute.
Deceased: 1975

>Mr. Stuart E. Buckley retired in 1961 as Manager of Planning for the Humble Oil & Refining Company. He continues to do a limited amount of consulting.

Mr. Buckley's career with Humble Oil has included a variety of activities. From 1933-1942 he served as a Research Engineer in Houston until being promoted to the position of Head of the Production Research Division. He later worked as Assistant Chief Geologist, Assistant Manager for Exploration and Manager of the Economics Department before being appointed Manager of Corporate Planning in 1960.

His work has been recognized by numerous awards which include the AIME Anthony F. Lucas Gold Medal (1956), the Certificate of Service of the AIME Petroleum Branch (1952) and the Certificate of Appreciation of the American Petroleum Institute ( 1953, 1958). He was chosen as a Fellow of the American Association for the Advancement of Science in 1960 and as the Distinguished Engineering Graduate of the University of Texas in 1961.

Mr. Buckley received his B.S. and M.S. degrees in Chemical Engineering from the University of Texas in 1932. He has also done graduate work in Physical Chemistry and Mathematics and he attended the Advanced Management Program of the Harvard University Business School in 1958.