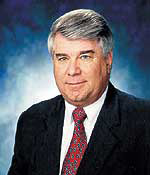 In recognition of his outstanding service to the Society of Petroleum Engineers, outstanding contributions to the petroleum engineering technology and literature, and substantial credentials in academia.
Deceased: 2019

Since April 1999, Dr. Holditch has been a Schlumberger Fellow. In this position, he is a Production and Reservoir Engineering advisor to the top managers within Schlumberger. He formed S. A. Holditch & Associates, Inc. in 1977. In 1997, this firm became a part of Schlumberger Technology Corporation. In 1999, the Holditch firm was combined with other groups in Schlumberger to form Holditch Reservoir Technologies. Dr. Holditch was President of the Society of Petroleum Engineers (SPE) in 2002 and served as a Trustee for the American Institute of Mining, Metallurgical, and Petroleum Engineers (AIME) from 1997-1998. He has received numerous awards in recognition of his technical achievements and leadership. In 1995, he was elected to the National Academy of Engineering (NAE), which is the highest honor awarded to an engineer. In 1997, he was elected to the Russian Academy of Natural Sciences and, in 1998, to the Petroleum Engineering Academy of Distinguished Graduates at Texas A&M University, where he is still on the faculty as Professor Emeritus. He began his career at Shell Oil Company (1970-1974) and Pan American Petroleum Corporation (1968-1969). In 1989, Dr. Holditch was selected as a Distinguished Member of the SPE and was given the Lester C. Uren award in 1994. In 1999, he received the ASME Rhodes Industry Leadership Award and the SPE John Franklin Carll Award. He has published over 100 technical articles. Dr. Holditch regularly teaches short courses on Hydraulic Fracture Treatment Design, Formation Evaluation, and Coalbed Methane Engineering for clients around the world.