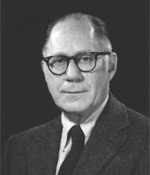 For significant contributions to the technology and technical literature of mining, particularly within the scope of mine plant and engineering practice, and for his continuing responsiveness to the needs of the professional arena through consulting and leadership activities in the Society of Mining Engineers and the Institute.
Deceased: 1995

Stanley D. Michaelson was born in New York City in 1913. Although his studies at Lehigh University were interrupted by the depression of 1929, he later returned and received a BS in Mining Engineering in I934. In the following year he studied Metallurgy under a Lehigh Institute of Research Fellowship.

After a brief career with Bethlehem Steel, he went to Allis-Chalmers in Milwaukee, first in the mining laboratory, then as Engineer-in-Charge of the laboratory where he developed the process flowsheets for a wide variety of ores and other materials. He was promoted to Metallurgical Engineer and, finally, Sales and Field Engineer before entering the U.S. Army in 1941. He was released in 1946 as a Lieutenant Colonel in the Ordnance Department and returned to Allis-Chalmers as Ore Processing Engineer and then as Director of its Basie Industries Research Laboratories. During this period, he was active in crushing and grinding research and engineering and published significant papers on both subjects.

In 1947, he joined Tennessee Coal and Iron Division of U. S. Steel. A year later, in recognition of his work on the construction of the 20,000 ton per day Concord Mine, he was made Chief Engineer-Coal Mines, eventually advancing to Chief Engineer for Raw Materials. In 1954, Mr. Michaelson became Chief Engineer for Kennecott Copper Corporation's Western Mining Divisions. The Montana School of Mines awarded him an honorary professional degree last year for his projects with Kennecott.

Mr. Michaelson has been active in AIME, having been Chairman of the Minerals Beneficiation Division and a Director of the Institute, In 1958 he served as President of the Society of Mining Engineers of AIME and the next year as Vice-President and Director of AIME.