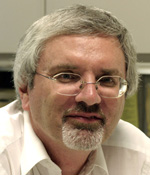 For advancement in Petroleum and Geothermal Engineering as represented by the numerous awards that he has received and for service in Petroleum Engineering 11 years as Chair, significantly strengthening the Department and diversity.