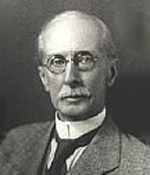 Consulting mining engineer; inspiring preceptor of many hundreds of students as Professor of Mining at Columbia for thirty-three years; creator and editor-in-chief of that unique volume that by itself constitutes a library on mining engineering — Peele’s Handbook.
Deceased: 1942

Robert Peele gained international renown for his monumental contributions to mining literature. He is best remembered for assembling the authors for and edition three editions of the Mining Engineer’s Handbook, published in 1918, 1927, and 1941, respectively. The Handbook fulfilled a need throughout the mining world and sold more than 100,000 copies worldwide. The 1941 edition, published in two volumes, remained in print until 1989, nearly fifty years after Robert Peele’s death.

Robert Peele was born in New York City, where he graduated from the Columbia School of Mines in 1883. After graduation, he worked in gold and silver mines in North Carolina, Arizona, and Colorado, and performed mine evaluations in New Mexico, Colombia, and Dutch Guiana. Later, he became Superintendent of the Oregon Gold Mining Company and served in South America as Examining Engineer for the Peruvian Exploration Syndicate of London.

In 1891, Henry B Munroe formed a separate Department of Mining Engineering at Columbia University, and in 1892, he hired Robert Peele as Adjunct Professor of Mining to help build the department. During his academic career, Peele was known as a professor who thoroughly taught the art and science of mine examination and evaluation. His students often talked about the intense summer courses of Professor Peele, which emphasized hands-on experience and concentrated study of a particular working mine.

In addition to his Mining Engineer’s Handbook, Robert Peele produced other important work as a writer and editor. In 1907, he translated and published a German book by R. Reimer titled Shaftsinking Under Difficult Conditions. A year later, he completed Compressed Air Plant in Mines, a design manual for mining engineers. The book was later rewritten to address all compressed air facilities, renamed Compressed Air Plant, and published in four more editions. It became one of the essential references for all engineers involved in compressed air application.

Robert Peele also pursued a career as a consultant, traveling to and evaluating mining properties as a partner in the consulting firm of Olcott, Fearn & Peele (later known as Olcott, Corning & Peele).

Robert Peele’s most important legacy to mining continues to be his Mining Engineer’s Handbook, one of the most successful and widely used mining books of the twentieth century.