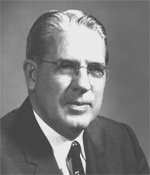 For his many important contributions to the advancement of petroleum production technology and,for outstanding service to the Society of Petroleum Engineers and the Institute.
Deceased: 1995