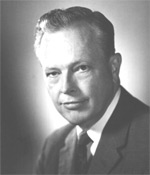 For long and distinguished service to the engineering and geological profession through service on governmental, academic, and civic agencies; for leadership in water resources standards and oil and gas reserve definitions and standards; and in recognition of his management of a major international consulting organization.
Deceased: 1999

Robert B. Gilmore has worked in the petroleum industry for 51 years. He graduated from the University of Tulsa with a B.S. In Petroleum Engineering. Joining DeGolyer and MacNaughton In 1941, Mr. Gilmore was elected President in 1962, Chairman of the Board in 1967, Senior Chairman of the Board in 1972. and Vice Chairman of the Executive Committee in 1978. During his employment with DeGolyer and MacNaughton he has taken part In almost all types of assignments undertaken by the firm, including geological research and engineerIng, reservoir analysis, preparation of appraisal recommendations, and geological testimony as an expert witness in Federal Courts and before the Federal Power Commission.

Mr. Gilmore is a member of numerous professional organizations and has been active in his community in such capacities as President of the Board of Education, Dallas Independent School District, and Trustee of Children's Medical Center, Dallas. He is a member of the Energy Resources Committee of the Interstate Oil Compact Commission, and of the Advisory Board to the College of Engineering and Physical Sciences, University of Tulsa, where he was selected as a Distinguished Alumnus in 1972. A former President of the Society of Petroleum Engineers, Mr. Gilmore was awarded the DeGolyer Distinguished Service Medal in 1975.