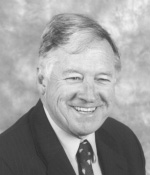 In recognition of his leadership and dedicated service to the Society and for his contributions to the profession in the areas of petroleum economics, reservoir management and field development.

Peter D. Gaffney is senior partner and co-founder of Gaffney, Cline & Associates, an international petroleum management and technical advisory firm. a graduate of the Royal School of Mines, Imperial College, University of London, he is both a chartered engineer and geologist. Mr. Gaffney originally joined SPE in 1958 in Venezuela. He was a Distinguished Lecturer in 1988, became a director at large and then SPE Treasurer, before becoming 1996 SPE President. In 1981, the Institute of Geology awarded him the Aberconway Medal for his distinguished work in the advancement of the profession and practice of geology. A trustee of ISEM (the Institute for the Study of Earth and Man at SMU in Dallas), Mr. Gaffney is also a fellow of the Geological Society, the Institute of Petroleum, the Institute of Gas Engineers and the Institute of Data Processing. He is a member of the American Association of Petroleum Geologists and the Association of Professional Engineers of Trinidad and Tobago where Gaffney, Cline & Associates had its first office.