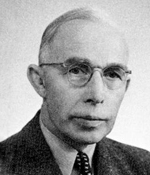 For his many outstanding contributions to the knowledge of Swedish mineral deposits, particularly of its iron ores, and for his years of devotion to the advancement of the sciences of geology, geodesy and geophysics in Sweden as Professor and then Chairman of the Royal Institute of Technology, as Director of the Swedish Geological Survey and as Chairman of the National Committee of Geodesy and Geophysics.
Deceased: 1977

Nils H. Magnusson was born in Filipstad, Sweden, in 1890. He studied at the University of Stockholm where he received his early degrees in 1913. In 1925, he was awarded a Ph.D. He taught Geology at that University from 1916 to 1918 when he became Assistant Geologist at the Geological Survey, remaining in that position until 1926. He served as temporary State Geologist until 1930, when he was appointed State Geologist. Dr. Magnusson held that office until 1942 when he became Professor in Mineralogy and Geology at the Royal Institute of Technology in Stockholm. He was appointed Director of the Geological Survey of Sweden in 1951 and held that office until 1958. Among the many honors conferred on Dr. Magnusson were the presidencies of the Institutes of Technology in Stockholm and Gothenburg, of the National Committee of Geodesy and Geophysics, and of the National Committee of Geology. He received the Rinmann Gold Medal from the Swedish Iron Masters' Association, and the Brinell Gold Medal from the Royal Swedish Academy of Engineering Sciences. Geological excursions have taken him to many parts of the world and he has to his credit a large number of publications on the Swedish Precambrian and its iron and sulphide-ores.

Dr. Magnusson has been in constant demand for consultation on mining properties. He has exhibited not only a vast fund of knowledge of the geology of the ore deposits concerned, but also a clear insight into the requirements of the mining industry and an ability to present convincingly his recommendations. Dr. Joseph L. Gillson will accept the Certificate of Honorary Membership on behalf of Dr. Magnusson who cannot he present.