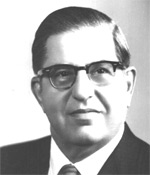 For his pioneering and organizing development of new materials and processes through his service to Government, industry and the profession as a leader in the U.S. Navy, the National Materials Advisory Board of the National Academy of Science/National Academy of Engineering, and the Advisory Group for Aeronautical Research and Development of the North Atlantic Treaty Organization.
Deceased: 2005

Nathan E. Promisel, a retired metallurgical engineer who was chief materials engineer of the Naval Air Systems Command for 25 years, died on December 15, 2005, at the age of 97. He was known to his colleagues as “Mr. Materials Science” and is credited for helping make the Command’s materials laboratory one of the leading research facilities in the nation. Nate was elected to the National Academy of Engineering in 1978.

He was born June 20, 1908, in Malden, Massachusetts. He skipped three years of elementary school. He received bachelor’s and master’s degrees from the Massachusetts Institute of Technology, the latter in 1930. Concerned about future job prospects, and faced with a nice offer, he left MIT upon receipt of his master’s degree in 1930 and went to work for the International Silver Company in Meriden, Connecticut, where he was assistant director of the laboratory. He was with the company from 1930 to 1940 and, at the same time, continued his studies at Yale University, where he also earned B.S. and M.S. degrees.

From 1940 to 1966, Nate was chief materials scientist and engineer for the Navy Department in Washington, D.C. From 1955 to 1964 he was the recipient of outstanding accomplishment awards from the Navy Department. From 1959 to 1971 he was member and chairman of the NATO (AGARD) Structures and Materials Panel. In 1962–1963 he was science attaché at the U.S. Embassy in London.

Mr. Promisel pioneered the development of tungsten and molybdenum alloys for many applications, including their use in rocket nozzles.

He published more than 40 papers, co-authored or edited five books, including Advances in Materials Research (1963); Science and Technology of Refractory Metals (1964); and Science, Technology and Application of Titanium; (1970). He lectured extensively. He was credited with advancing the practice of electroplating, which uses electric current to apply a thin, even coat of metal on an object.