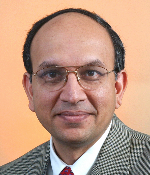 Mukul M. Sharma is Professor and holds the "Tex" Moncrief Chair in the Department of Petroleum and Geosystems Engineering at the University of Texas at Austin where he has been for the past 24 years. He served as Chairman of the Department from 2001 to 2005. His current research interests include improved oil recovery, injection water management, hydraulic fracturing, formation damage and petrophysics. He has published more than 200 journal articles and conference proceedings and has 11 patents. Sharma has a bachelor of technology in chemical engineering from the Indian Institute of Technology and an MS and PhD in chemical and petroleum engineering from the University of Southern California.

Among his many awards, Dr. Sharma is the recipient of the 2009 Lucas Gold Medal, the 2004 SPE Faculty Distinguished Achievement Award, the 2002 Lester C. Uren Award and the 1998 SPE Formation Evaluation Award. He served as an SPE Distinguished Lecturer in 2002, has served on the Editorial Boards of many journals, and taught and consulted for industry worldwide.