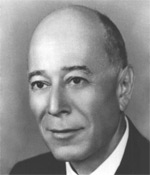 In recognition of service to industry and the Institute through his creative investigations and published works that provided fundamental insights into petroleum recovery mechanisms and stimulated the application of reservoir engineering to production practice.
Deceased: 1998

He received both his B.S. and M.A. degrees in Physics from Ohio State University and he holds a Ph.D. in Theoretical Physics from the California Institute of Technology. His professional career has been spent with the Gulf Oil Corporation. From 1929 to 1950 he served as a Research Engineer and later Chief of the Physics Division of the Gulf Research and Development Company, and from 1950 to 1961 he was the Technical Coordinator for the Production Department of the Gulf Oil Corporation, Pittsburgh. He has held the position of Technical Advisor since 1961.

Honors that he has received include the Anthony Lucas Gold Medal of AIME ( 1953), the Lester U ren Award of the Society of Petroleum Engineers of AIME ( 1969), and in 1963 he was selected as the SPE-AIME Distinguished Lecturer. He has authored two books and over one hundred technical papers on subjects such as geophysical prospecting, fluid flow through porous media, oil production, lubrication and early "modem" physics. He has fifteen U.S. patents.

Dr. Muskat has been the Chairman of the American Petroleum Institute Committee on Reserves and Productive Capacity since 1955 and he served as the Vice Chairman of the Petroleum Branch of AIME (now the Society of Petroleum Engineers of AIME) in 1953. From 1961-1966 he was a member of the Advisory Council on Geological Engineering at Princeton University and in 1965 he was a member of the U.S. Delegation to the United Nations ECAFE Third Symposium on the Development of Petroleum Resources of Asia and the Far East, in Tokyo.