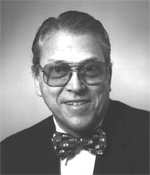 For demonstrating the highest standards of professionalism, for advocacy of a worldwide scope for thee Society of Petroleum Engineers, and for major contributions to well stimulation and oil recovery processes.

Michael Prats retired from Shell Oil Company in February, 1989, after forty years with the company. He is currently President of Michael Prats & Associates, Inc., offering services in reservoir engineering. He received his B.S. and M.S. in Physics from the University of Texas, Austin.

Mr. Prats has contributed significantly to the field of petroleum reservoir engineering, primarily through his efforts in pressure transient analysts, enhanced oil recovery, and applied mathematics. He has written two books, authored or co-authored numerous technical papers and holds patents in the U.S., Canada and Venezuela.

A member of the Society of Petroleum Engineers since 1952, Mr. Prats has chaired several committees, served as an SPE Director-at-Large from 1976-1979 and has been Senior Technical Editor since 1987. Among his many honors, Mr. Prats has received the SPE Lester C. Uren Award in 1984 and was named a Distinguished Member of SPE in 1983. He was elected to the National Academy of EngineerIng in 1986.