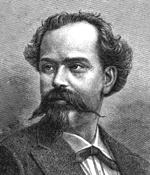 Manuel Maria Contreras, originally from Mexico City also died there (1833-1902). He was mining engineer (1856), inventor, mining inspector and deputy in the state of Hidalgo and Guanajuato until 1868, was assayer of the Mint, a consultant of several works in the Valley of Mexico, alderman and mayor of the capital of the Republic, deputy and senator. His main activity focused on teaching math from 1868, and experimental physics in 1874 from the National Preparatory School, and mechanics since 1877, in the Engineers. He subsequently directed the School Standard. He is the author of the following books: Arithmetic, Algebra, Geometry and Trigonometry.