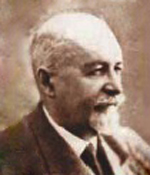 Albert Marcel Portevin, a French metallurgist, was born in Paris in 1880. He was brought up by his mother after his father’s early death. Trained as an engineer at the École Centrale des Arts et Manufactures, he was named professor at that school in 1925. He also taught at the École Supérieure de Fonderie and at the École Supérieure de Soudure. In 1907 he became editor in chief of the Revue de métallurgieand, with Henry Le Chatelier and Léon Guillet, was principally responsible for the great success of the journal. In 1942 Portevin was elected unanimously to the Académie des Sciences. He was also a grand officer of the Legion of Honor.

Portevin was a precursor in many aspects of the science of metallurgy. In 1905, while working in the metallurgical laboratory of the Établissements de Dion-Bouton, he conducted a micrographic study of chrome steels and was struck by their resistance to ordinary reagents when the chrome content exceeded 9 to 10 percent. He systematically studied the ways in which these steels could be corroded, and in his report to the Carnegie Foundation (1909) he gave precise figures on the chemical resistance of tempered chrome steels (in tempering, the chrome was put into solid solution) to such oxidizing reagents as nitric acid and picric acid.

In order to use these steels, however, it was necessary to make them amenable to standard milling processes. Through a judicious interpretation of the equilibrium diagrams, Portevin determined the appropriate thermal treatment for softening them. This achievement was even greater than his initial discovery, for his opinion was then in contradiction with that of metallurgists who were working from incomplete or erroneous diagrams. Today stainless steels are essential in the chemical industry, and their immense development since the 1940’s is intimately linked with the metallurgical progress made in their production.

Portevin’s interest in chemical resistance never ceased, and he set forth the general principles for obtaining it: the rules of homogeneity, of selfscreening, and of concentration limit—which together enabled him to achieve constant progress in the field.

Portevin’s discoveries and studies extended to the major areas of metallurgy. He was a pioneer in the scientific tempering of steels, in the structural hardening of light alloys, and in the introduction of scientific methods in the casting and welding of metals. Albert Sauveur paid tribute to Portevin in 1937 in his treatise on metallography: “The French metallurgist Albert Portevin is able to explain the most subtle subjects in metallurgy; his thought has penetrated all the darkest corners of this science and in them he has cast a bright light.”