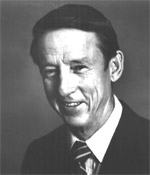 For major contributions to petroleum engineering technology in production operations-principally multiphase flow and gas-lift operations-and in recognition of his work as author, university professor, and administrator.
Deceased: 2009

A Distinguished Member of the Society of Petroleum Engineers, Dr. Brown was awarded the John Franklin Carll Award in 1983. He served as chairman of the SPE Balcones Section in 1965, Distinguished Lecturer during 1969-1970, and SPE director from 1969-1972. Dr. Brown was elected to the National Academy of Engineering in 1987.