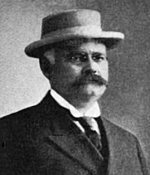 In recognition of his work as an engineer and administrator of mines and his services to mining engineering education.
Deceased: 1933

John Markle, a son of the late G.B. Markle, was born in Hazleton Pennsylvania, December 15, 1858. He was the son of George B. Markle, a coalminer, who had established a company engaged in the mining industry. John Markle entered the mining industry in the firm his father had founded after acquiring a degree in mining engineering from Lafayette College in 1880. He became one of the most successful and wealthiest coal mining executives in the country and achieved national recognition for his engineering prowess in the field.

Markle became known nationally as the builder of the Jeddo drainage tunnel, which reclaimed Pennsylvania mines inundated by floods in 1886. The tunnel is 7 ft. by 9 ft. and extends through five miles of solid rock. The cost of the work was in the neighborhood of $1 million.

Markle’s early philanthropy consisted of personal and palliative giving to individuals and causes. With ever increasing wealth, he and his wife, in 1902 moved to New York in order to better manage his burgeoning business interests. Eventually, directly influenced by his friend J. Pierpont Morgan, and indirectly by the examples of John D. Rockefeller and Andrew Carnegie, Markle turned to the foundation as the best organizational means to carry on his philanthropy.

In 1927 John Markle set up the John and Mary R. Markle Foundation with an initial endowment of $3 million. Until his death in 1933, Markle operated the Markle Foundation as a personal gift-giving device for grants to designated worthy individuals or causes that he had previously supported. Each year until his death he would supplement foundation giving allocations with monies from his own income. Following Markle’s death in 1933, the foundation received additional sums from his estate which left it with a total endowment of about $15 million.