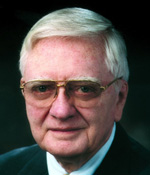 For visionary contributions in the field of oil and gas well completion technology, especially in the area of well stimulation; and for commitment to advancing standards of professionalism in engineering.
Deceased: 2009

John L. Gidley, recipient of the SPE John Franklin Carll Award in 1992 and both an Honorary Member and Distinguished Member of the Society, died 30 March 2009. He was a long-time employee of Exxon—where his work led to several breakthroughs in acidizing—as well as a visiting professor at Texas A&M University.

Gidley joined Humble Oil & Refining in 1954 as an engineer in the production research division (now Exxon Production Research). His work in Exxon’s subsurface engineering group helped generate new techniques for well stimulation, cementing, and sand control. During his 31-year career with Exxon, Gidley was responsible for eight patents and authored numerous technical publications. In 1969, he invented a successful sandstone acidizing process that increased oil production for Exxon. In 1986, he retired from Exxon and organized a consulting firm and a joint research project on sandstone acidizing. This led to his discovery of six patents on improved acidizing techniques, which are still in active use today. Gidley also taught as a visiting professor in the Petroleum Engineering Department at Texas A&M University during 1992–98.

Throughout his career, Gidley received numerous awards. In 1999, the University of Texas at Austin named him a Distinguished Engineering Graduate. He was recognized as an SPE Distinguished Member and awarded the SPE Distinguished Service Award in 1990 and the SPE John Franklin Carll Award in 1992, and became an SPE Honorary Member—the Society’s highest award—in 2000. Gidley was active in SPE and coauthored a monograph on acidizing fundamentals. Because of his longtime continuous membership in SPE, Gidley was recognized as a 25-Year Club Member; a Senior Member; and a Legion of Honor Member in 2004, which is given to a member with 50 years of continuous membership in SPE.