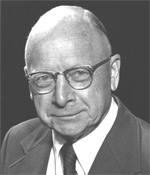 For generous and unselfish professional service, and for wisdom, integrity, and exceptional technical competence in portraying and advancing the role of minerals for mankind, particularly the availability of petroleum.
Deceased: 1974

John Elliott Sherborne was appointed Associate Research Director for Union Oil Company of California in 1965 and is presently on special assignment.

Mr. Sherborne was born in Leeds, England and came to the United States in 1920, subsequently receiving his Bachelor of Science degree from the California Institute of Technology and his Master's degree in petroleum engineering from the University of Southern California. Upon graduation, he became a research fellow at the California Institute of Technology, working on the thermodynamics and phase behavior of hydrocarbons. In 1936 he was employed by Union Oil Company of California as a production engineer. After serving in a variety of engineering capacities, he became Chief Production Engineer in 1948, and in 1949 was transferred to the Research Department to head the Production Research Division. Until 1966 he was in charge of Union's Exploration and Production Research, and was appointed to his present position in 1965. Mr. Sherborne also served on the petroleum engineering faculty of the University of Southern California from 1940 to 1947. Mr. Sherborne received the AIME Anthony F. Lucas Gold Medal in 1967 for his contributions in the field of petroleum engineering. He received the Certificate of Service in 1959 from the Society of Petroleum Engineers of AIME and was a Distinguished Lecturer for SPE-AIME during 1970-71. He has also served as chairman and member of several AlME committees. Mr. Sherborne is a member of Sigma Xi, Pi Epsilon Tau, and the American Petroleum Institute and is a Fellow of the American Institute of Chemists.