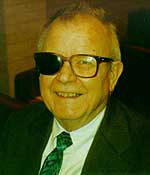 In recognition of his demonstrated commitment to contribute and support the Society of Petroleum Engineers, improve petroleum engineering technology and the engineering profession as a whole on a continuous basis for over 50 years.
Deceased: 2014

Jim Rike, best known for his success in improving production at the lowest cost, has had a petroleum career equally divided between reservoir behavior, drilling, and operations. During forty years with Exxon (Humble) and as a consultant, his assignments included drilling, production operations, unitization, reservoir analysis, completion and workover design, development engineering, and training. Engineering assignments in the United States covered operations throughout the country, both onshore and offshore. International assignments have included South America, Canada, Africa, Middle East, North Sea, and Far East. He has consulted in management or engineering areas in virtually every petroleum producing country in the non Communist world. Rike played a key role in the development of tubingless completions, directional perforators, sand control with plastics, coiled tubing rigs, concentric tubing workover and completion operations, and advanced offshore completion practices. He has authored patents and papers on these new developments, as well as cementing, perforating, wireline operations, workover economics, and worldwide industry practices. Jim graduated from Texas A & M in 1948 and is a Registered Professional Engineer in Louisiana and Texas. He was, for eighteen years, a member or Chairman of the Well Completions Committee for the Society of Petroleum Engineers. He was a member of the 1972 Fall Meeting Program Committee, and was a member of the Organizational Committee for the Formation Damage Symposiums initiated in 1974. He served as SPE "Distinguished Lecturer" in 1973, reaching over thirty domestic and international sections of the Society. He was Chairman of the Well Completions Reprint Booklet Committee. He was keynote speaker for the 1979 International Petroleum Exposition Symposium. As a consultant, Rike has been retained by major and independent producing companies (domestic and foreign), drilling contractors, workover contractors, service companies, universities, and professional organizations. Jim is well known for his seminars with managers, engineers, and field supervisors on well completion and workover practices, reservoir engineering, surface production facilities, and other production areas. Jim has consulted or done in house training for Amoco; Schlumberger; Union; Phillips; Gulf; Mobil; BJ Hughes; Texaco; Exxon; Hunt; Chevron; Government Agencies; YPFB (Bolivia); Petro Peru, Lagoven and Maraven (Venezuela); Petrobras (Brazil); Ecopetrol (Colombia); PTI (Nigeria); ADMA and ADCO (Abu Dhabi); Gupco (Egypt); and many others. Despite significant handicaps , Jim Rike is quite successful as a teacher and consultant. He has demonstrated an unusual ability to structure studies and improvement recommendations such that clients can build their own conclusions on good basic technology, sound logic, and thoroughly demonstrated results. Testimonials are filled with remarks such as "I never understood how all this tied together until now!" or "It is remarkable how many myths and misconceptions I have had straightened out!" and "Jim proves more with fourth grade arithmetic than I ever imagined could be shown with higher math!" It is always a big surprise to see Jim mix managers, experienced engineers, research personnel, young engineering graduates, and field supervisors in the same room and have them all remark about how well they understood. The underlying theme seems to be "practical and straightforward." *As a result of detached retinas and cataracts, Rike is legally blind.