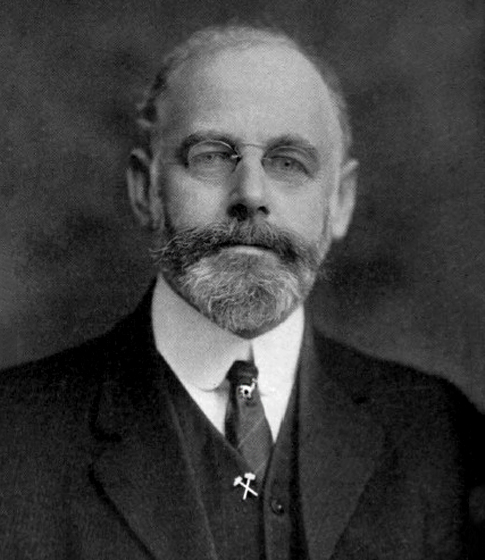 When this boy James, who was destined to attain marked distinction in the world of science reached school age, he was sent by his parents to Lockwood's Academy in Brooklyn and later to Adelphi Academy, now known as Adelphi College, in the same city, from which he graduated in 1876. From the first he took a keen interest in natural history and was an industrious collector, especially in the field of botany. From Adelphi College he went to Amherst, from which he graduated as Bachelor of Arts in 1881. After leaving Amherst he entered the Columbia School of Mines where he followed a course of more technical training, graduating in the year 1884 with the degree of Engineer of Mines. Once again, at Columbia, he had the good fortune to come under the influence of an inspiring teacher, Dr. John Strong Newberry, the distinguished geologist and palaeontologist, and it was through Newberry's influence that his attention was directed definitely to the study of geology as his life's work. He then took the wise course of going abroad to continue his studies and thus see the geology of other countries and the problems of geology from other viewpoints.

While in Germany he became acquainted with Henry Shaler Williams, Professor of Geology in Cornell University, who was impressed by his character and ability. When Williams returned to Ithaca he requested the authorities of Cornell University to establish an assistantship in the department of geology and Professor Williams selected young Kemp for the place. Kemp put his foot on the first rung of the ladder of success in this appointment to a junior position on the staff of the department of geology at Cornell University in 1886. He eventually rose to the position of assistant professor at Cornell, where he remained until 1891. In this year he received a call from Columbia University to the position of adjunct professor of geology under his former teacher, Professor Newberry. He accepted this and upon the death of Professor Newberry in the following year he became head of the department of geology, which position he continued to occupy until the time of his death.

He took a very keen and active interest in many of the great scientific societies. He was one of the group of thirteen men who in the year 1888 organized the Geological Society of America. He was a charter member of this Society and was its secretary for many years and, having served in almost every capacity in it, was elected as its president in 1921. He was president of the New York Academy of Science, and of the Society of Economic Geologists, and vice president of the American Association for the Advancement of Science. In 1912 he was elected president of the Mining and Metallurgical Society of America and received its gold medal in 1914 and was made an honorary member in 1917. He became a member of the American Institute of Mining and Metallurgical Engineers in 1891 and was on its board of management from 1896 to 1898. He was vice president of the society in 1903 and 1904 and president in 1912. He was also a member of the American Philosophical Society and of the American Association of Petroleum Geologists. In 1911 he was awarded the blue ribbon of scientific attainment in the United States by being elected to membership in the National Academy of Sciences.

His Alma Mater, Amherst, in 1906, conferred upon him the degrees of D.Sc. Honoris Causa, and in 1913 on the occasion of the meeting of the Twelfth International Geological Congress in Canada, McGill University awarded to him the honorary degree of LL.D.

But while Professor Kemp was a man of very marked ability, wide knowledge, and widely recognized attainments, the outstanding characteristic which impressed itself at once on every one who met him, was his genial personality. Goodness and benevolence seemed to surround him like an aura and he met everyone with a display of interest which, as a matter of fact, he actually felt. Thus he made a friend of everyone he met.

His students, who were naturally brought into close contact with him and who were often in especial need of help and encouragement, came to regard him rather as a father than a teacher and in after life, scattered as they were over every known part of the habitable world where mines exist or geological work is to be done, they retained for him a very special and peculiar affection. An excellent portrait of him, in oils, was presented to Columbia University by his former pupils, on the occasion of the celebration of the 250th anniversary of this University, and now hangs in the library of the department of geology in Schermerhorn Hall. Wherever he went engineers or mine managers, former students of his, appeared and welcomed him. A past president of the Geological Society of America in the course of a humorous address delivered at one of the annual dinners of this Society some years ago, remarked that it had been his fortune to travel through almost every part of North America and while in the course of his journeys he had visited many places which were "wild and woolly," he had never yet found one which was "un-Kempt"!