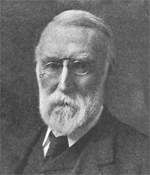 Dr. James Douglas, a metallurgist and mining engineer, was instrumental in the development of the great ore body at Bisbee, Arizona, The Copper Queen--the mine that lifted the Phelps Dodge Copper Corporation to the pinnacle of success.

Early in his career, Douglas helped develop an ingenious process for the extraction of copper from the ores.  Because of his reputation as a refiner of Arizona coppers, Dr. Douglas was sought out by the Phelps Dodge Corporation of New York. The company was contemplating investing in Arizona copper mining and needed a reliable consultant. Douglas's enthusiastic recommendation of the mineralized area around Bisbee's Copper Queen property led to its acquisition and he spent the next 20 years of his life devoting his energies to making the Copper Queen one of the great producers of its time--second only to Anaconda's mighty Butte. The great success of the Bisbee mine earned Dr. Douglas the respect of his fellow engineers and made him the wealthy president of the Phelps Dodge Corporation.

The American Institute of Mining Engineers annually awards the James Douglas Gold Medal in his memory.